Mediapooli organized 2 December 2020 an international free webinar on QAnon, a conspiracy theory, which has its origin in the USA. The cult makes its way around the world, spreads conspiracy theories and disinformation on social media, and undermines trust in governments, public institutes, academic research, and journalists.

The topics  discussed at the webinar were among other things: What challenges does the traditional news media see in the cult from the perspective of journalistic reporting? How can social media influencers tackle the harmful effects of the phenomena? What do we know about QAnon and should we be worried about it?

Greg Miller is National Security Correspondent for The Washington Post, winner of Pulitzer Prize and author of The Apprentice.

Jacob Davey is Project Manager working across ‘think and do’ tank ISD’s online counter-narrative work. Mr Davey is also one of the authors of The Genesis of a Conspiracy Theory book.

Isaac Stanley-Becker is National political reporter at The Washington Post. He has anchored the Post’s coverage of online election interference and hate speech.

Noora Shingler is a Finnish social media influencer and the chief editor of NU-media.

Jukka Niva is the moderator of the conference. He’s journalist and the Head of @YleNewsLab. 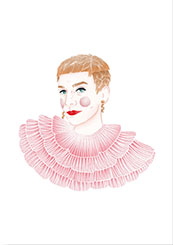 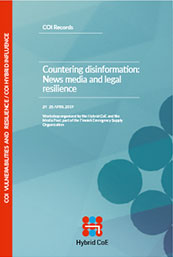 Report from the international workshop organized by the Hybrid CoE and the Media Pool in late April 2019. The workshop discussed media resilience as well as the ways how to counter disinformation and hybrid threats. The report contains concrete policy recommendations to the EU on the main workshop topics.